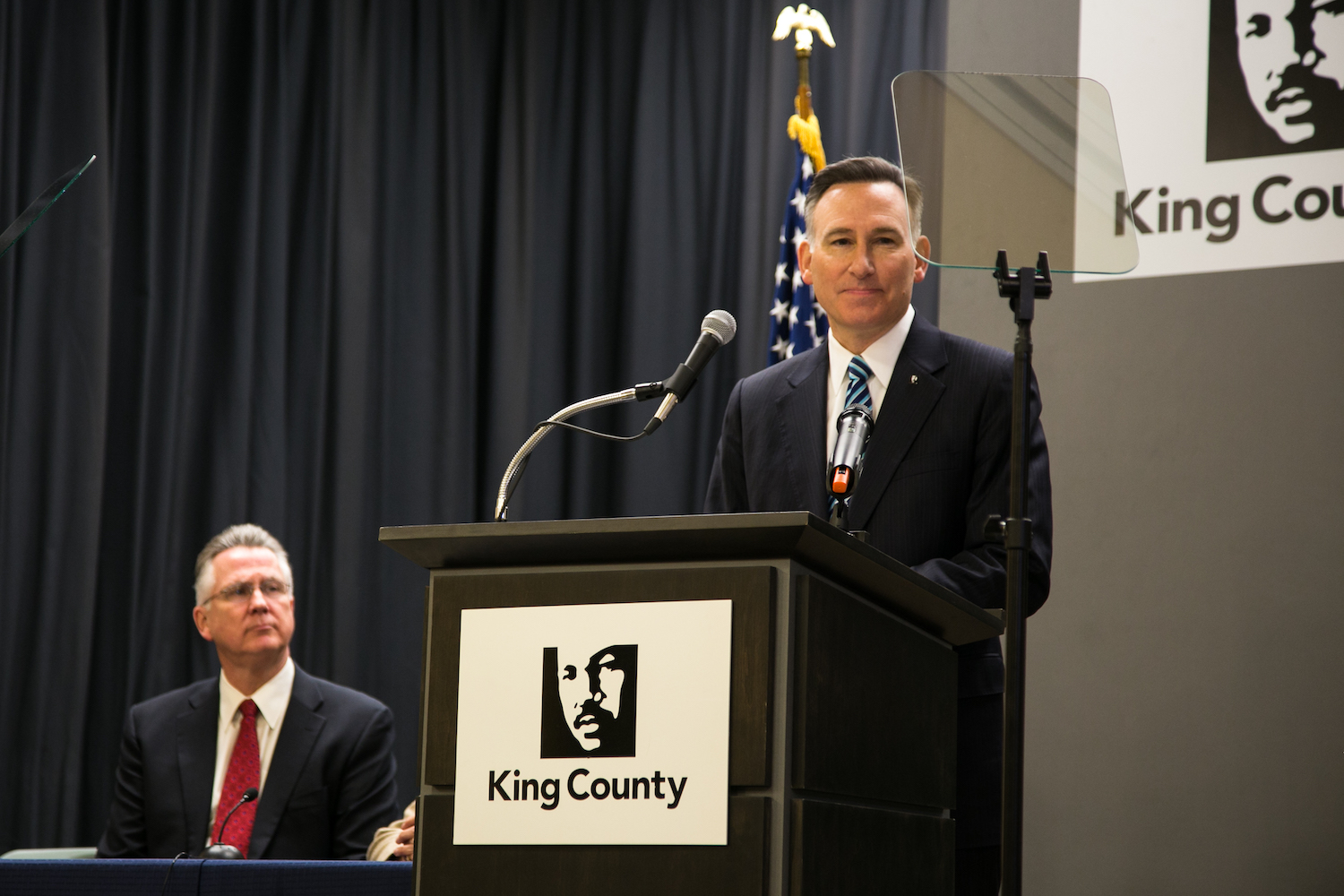 With Congress unwilling to take concerted action on climate change, it's worth celebrating that county and city leaders in the Northwest are up to the task of climate leadership at the regional scale.

On July 23, King County’s Growth Management Planning Council voted unanimously to adopt ambitious, countywide greenhouse gas reduction targets. King County is the 13th most-populous county in the country, and a zone responsible for 25 percent of Washington State’s carbon emissions. The new emissions reduction targets are the result of six months of intense deliberation among the governmental members of the King County-Cities Climate Collaboration and the Sound Cities Association.

“Our state and our region are national leaders in addressing the most important issue of our lifetime,” said King County Executive Dow Constantine moments before the vote was taken. “We have the opportunity to present a new model for regional collaboration with a shared countywide target, one that aligns with best available science to avoid the most dangerous impacts of climate change.”

Collaboration is the Name of the Game

Washington State’s 1990 Growth Management Act requires counties and cities to collaborate on framework policies that guide comprehensive planning for all jurisdictions. The GMPC is where the planning rules are made for the county and the 39 cities within its boundaries.

The motion the GMPC passed calls for the county and cities to reduce countywide sources of greenhouse gas emissions (GHG), compared to a 2007 baseline by 25% by 2020, 50% by 2030, and 80% by 2050; assess countywide GHG emissions at least every two years; and update the county’s GHG inventory at least every five years.

“This is a great step forward and I am proud to be part of a state that is taking steps to address climate change,” Seattle City Councilmember Mike O’Brien, “We may not have exact answers but without setting these goals, we will never get there.”

The King County-Cities Climate Collaboration is a voluntary group of nine cities and King County that formed in 2011 to support one another in taking climate action. Together, these regional governments are developing a set of actions to achieve the ambitious targets that are tailored to each city’s particular needs, adopting national best practices for carbon reduction in buildings, transportation and land use, and energy supply.

The unanimous GMPC vote follows two summits convened by Executive Constantine and Mercer Island Mayor Bruce Bassett on February 13 and June 12 and attended by mayors and city councilmembers of 13 cities, which represents 70% of the county’s population.

Standing Tall and Firm on Climate

This is not the first time that King County’s elected leaders have stood up for climate action. On January 16, 2012, Executive Constantine penned a strong letter questioning plans to ship coal from Montana to China through Washington’s ports and calling for a full environmental assessment to thoroughly analyze the “significant adverse impacts” of the proposed Gateway Pacific Terminal project.

On July 21, 2013, King County and the cities of Issaquah, Kirkland, Redmond, Renton, and Snoqualmie requested that Puget Sound Energy (PSE) “more fully incorporate environmental, public health, and financial impacts and risks of continued reliance on on coal-produced electricity, most notably at Colstrip, where PSE is the largest owner.”

Five months later on December 5, 2013, the county and the cities of Issaquah, Kirkland, Mercer Island, Sammamish, Seattle, Shoreline, Snoqualmie, and Tukwila expressed strong support to Governor Jay Inslee and the members of the Climate Legislative and Executive Workgroup for bold action on climate in the Washington State Legislature.

“We don’t have all of the answers on this issue but this is the most important issue we will deal with in our lifetime,” said King County Council Chairman Larry Phillips, speaking in support of the motion. “Leadership here is looking forward and figuring out how to meet the future for our children and grandchildren and all who will come after us.”

Nicole Larson
Blog
Cash for Carbon
In the event that Democrats win back the Senate in 2020, current Senate Minority Leader Chuck Schumer (D-NY) would introduce a proposal to speed up the transition to electric vehicles that would eliminate carbon emissions from approximately 65 million gas-powered cars.

Nicole Larson
Blog
Jay Inslee Set the Standard for Presidential Candidate Climate Action
As someone who spends her waking hours working to accelerate the clean energy transition, I disagree strongly with critics who suggest that Washington Governor Jay Inslee’s aborted presidential campaign was a flop.

Eileen V. Quigley
Blog
Cities Adopting Best Practices and Lessons Learned at the Local Level
Now that we understand the decarbonization framework, have a sense of how cities understand their energy sources and uses, and break down carbon reduction targets and strategies, let's review best practices and lessons learned for urban carbon ...

Eileen V. Quigley
Blog
Cities Creating Strategies for Emission Reduction
Once a community’s overall sources and uses of energy are established, citizens and government officials must determine how to focus their emission-reduction efforts. To do so, they can use a carbon wedge analysis...