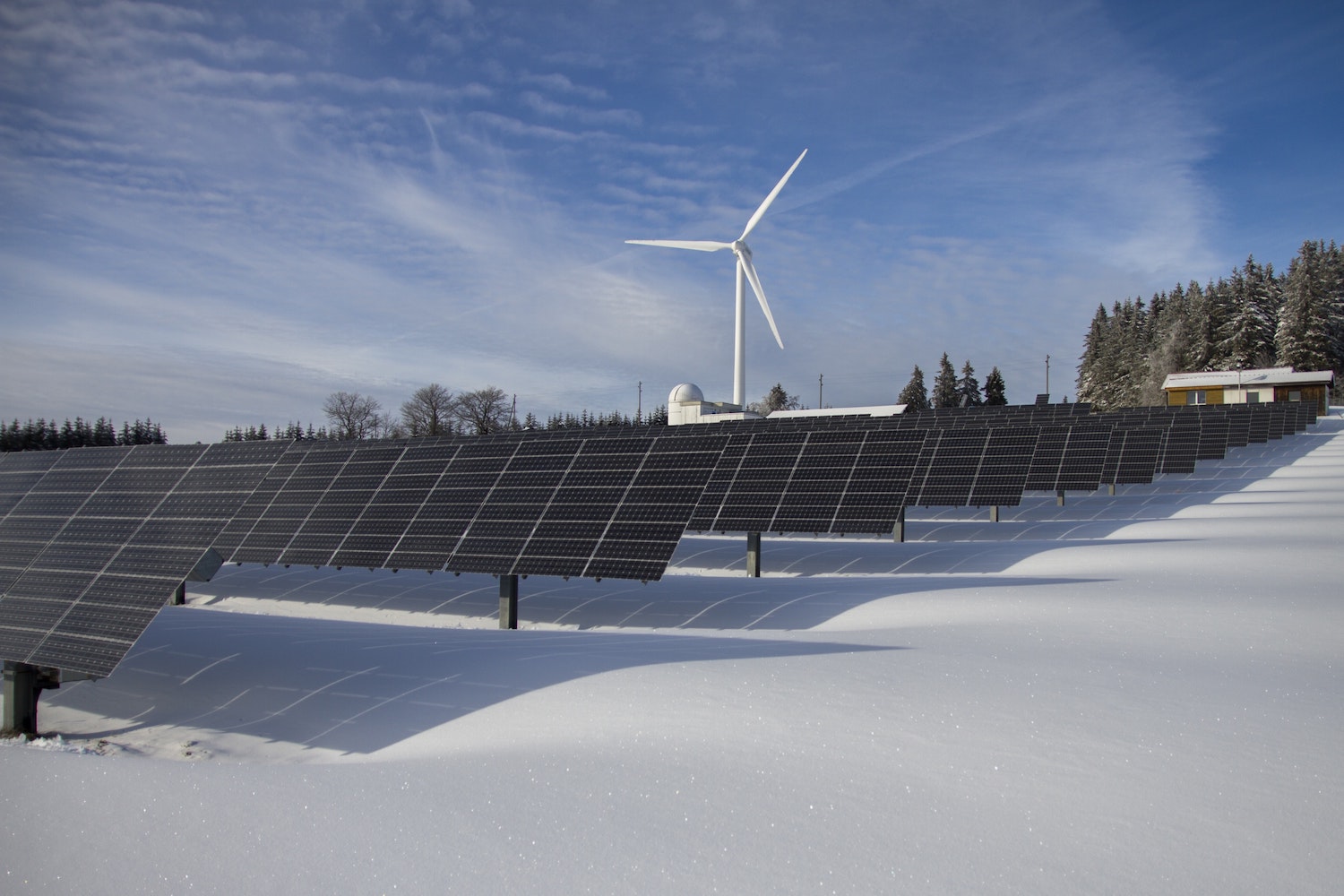 A basic decarbonization tenet is to clean the grid, electrify whatever processes can be electrified, and leave as small as possible a remaining carbon budget for the sectors that are harder to decarbonize, such as aviation.

We need to replace technologies that run on combustion—such as gasoline vehicles and natural gas heating and cooling—with alternatives that run on electricity, such as electric vehicles and heat pumps. Paired with this, we must ensure that our energy consumption comes from a power grid that is as clean as possible.

There are plenty of questions about exactly what mix of energy sources will get us to a carbon-free grid by a particular year, whether resources should be distributed or centralized, and supply-side versus demand-side solutions. Regardless of these issues, there is broad consensus that pathways to clean electricity exist and that we must pursue them as quickly as possible.

Why is it so important to clean the grid and switch processes to electricity? Because as the grid gets cleaner, whatever it powers also gets cleaner. Take the emissions of a natural gas furnace versus a heat pump, for example. A natural gas furnace has fixed emissions and will release carbon emissions throughout its full lifespan, potentially 20 years. In contrast, a heat pump’s per-unit emissions are based on the electric power grid and will decline and become cleaner as coal and natural gas are removed from the grid.

The same is true for cars. The only improvement for an internal combustion engine powered by gasoline is that when it wears out, you can swap it for a car with better miles per gallon and thereby emit fewer carbon emissions with the newer model. But an electric vehicle’s carbon emissions per mile will decline throughout its life as the grid that fuels the vehicle gets cleaner.

As David Roberts succinctly puts it: “Electrical grids are giant levers that can move the environmental needle on hundreds of millions of distributed technologies at once. Every device, appliance, or vehicle that runs on electricity benefits from the grid’s every incremental improvement.”

Fortunately, wind and solar have experienced an astounding growth rate in the past three years, technological improvements in manufacturing and materials have increased their capacity, all the while costs have plummeted. As Richard Heinberg and David Fridley note in their 2016 book, Our Renewable Future, “the price of photovoltaic (PV) cells has fallen by 99 percent over the past twenty-five years.” (p.49).

Meanwhile, in August 2017, the U.S. Department of Energy (DOE) reported that wind supplied 6% of U.S. electricity in 2017 and that 14 states received more than 10% of their electricity from wind. The graphic below from the DOE’s 2016 Wind Technologies Market Report (p.15) shows annual and cumulative growth in U.S. wind power capacity from 1998 to 2016.

The technological improvements in lower-cost wind turbines that are taller and have longer blades that allow for more efficient capture of wind resources improves their economic performance. The graphic below from Bloomberg New Energy Finance’s Michael Liebreich’s September 2017 keynote presentation shows the evolution of wind turbine heights and outputs:

While the benefits of a clean grid are well-established, it’s important to note that removing fossil fuels from the grid and replacing them with renewable energy is not a walk in the park because renewable energy such as wind or solar are intermittent—the sun shines during the day and wind often blows stronger at night—and without reliable and affordable storage, the generation from renewables can go unused or can flood the grid, causing difficulty for grid operators to manage load.

Grid operators are accustomed to dispatching power or ramping up and down power from predictable sources, such as natural gas, coal, nuclear, and hydroelectricity. This is called “dispatchable load” and it is power that can be delivered when customers require energy—usually in the afternoon/early evening as families return home from school or work until they go to bed and again in the morning as they awake until they leave the house for the day.

Coal and natural gas have capacity factors of 90% while wind’s capacity factor ranges between 22-43% and solar from 12-20%. (Capacity factor is the ratio of a generator's annual power production to the power it could have produced if it ran at 100% rated capacity.) Wind can sometimes balance solar, but at other times wind reinforces solar, which puts too much electricity on the grid that operators have to dispose of, or “shed.” Other times, neither the sun is shining, nor the wind is blowing.

The “duck curve” below from the California Independent System Operator (CAISO) depicts the challenges of meeting the steep “ramp” of power from 5:30p-8:30p and the risk of over-generation from renewable power in the middle of the day.

Electricity grid operators need ways to safely accommodate surges and lulls of variable renewables while meeting demand for power in the morning and evening. Utility-scale storage is key, so likely will be fleets of EV batteries that can release energy when wind and solar production slows. (Cars are parked an average of 95% of the time; a plugged-in electric vehicle could provide an invaluable storage service to the grid, once the battery technology is ready to flow power to power lines from EVs.)

The focus now is on a variety of types of storage as we look closely at technical improvement,  cost reduction, and adoption strategies for different battery and other technologies, similar to what we have seen with solar and wind. We know that a significant amount of storage will be required to help achieve a cleaner grid and that it will add cost to power systems.

In addition to clean sources of energy and storage, a different grid is required to meet tomorrow’s energy systems. The 20th century grid distributed power from large centralized coal, gas, nuclear, and hydro generating plants long distances to end users. The 21st century grid will need to accommodate multiple smaller and geographically distributed power sources that are variably generated. The graphic below from High West Energy illustrates this point:

Decentralized energy, where energy is generated and stored at a community scale could help communities be more self-sufficient and less vulnerable to disruption, especially during major weather events such as hurricanes or earthquakes, and could be less complex to operate. Distributed generation (DG) will provide some of the solution, although not the whole answer.

Smart grid technologies that include sensing and measurement in the form of smart meters in people’s homes and at businesses, or sensors on transmission networks, as well as grid management and forecasting software. Smart grid solutions will help reduce power consumption during peak periods and incorporate energy storage on the grid. They increase system complexity and raise privacy concerns as people’s precise energy use is shared with utilities and private companies, who will have to be trusted (or required) to guard this valuable information carefully. But smart grid applications are critically important to make the 21st century grid function.

Demand management (DM) is technology and programs that are geared toward changing the time and amount of energy consumers use. DM includes dynamic pricing, or time-of-use pricing (TOU), where the price of energy varies on an hour-by-hour basis to encourage people to choose when they use electricity depending upon how much they want to pay and relies on “smart” appliances and equipment that incorporate technology connected to the grid and can be controlled either by the utility or the customer. These DM solutions will help shift demand and therefore load from high peak to off-peak times—the kind of ramp that we saw in the Duck Curve graphic above.

The graphic below from the Pembina Institute demonstrates how decentralized energy production and grid-interactive technology functions in buildings:

Tens of trillions of dollars are required to pay for massive grid transition. Fossil fuel plants that have remaining operating lifetimes need to be retired. Storage and grid expansion and redesign will be expensive.

It is not clear how long solar and wind will need to be subsidized, although that becomes less likely every fiscal quarter as we see from the above graphs on solar and wind adoption. Solar and wind must be financed upfront but their “fuel” (wind and sun) are free and maintenance is relatively inexpensive. Solar and wind take up more land than power plants and therefore have higher property taxes. The question remains, where will the funding come from?

There are all kinds of scaling challenges to consider. Raw earth minerals are required for electromagnets in wind turbines and lithium is needed for batteries. There are also concerns with rare earth extraction and issues around supply and location.

But clean electricity is mission-critical; renewable energy is the key to a decarbonized future and its use is rapidly increasing while its costs drop dramatically. There are major design, cost, and scaling issues to overcome, but these all also pose enormous economic opportunity for the United States to embrace fully, something the Trump Administration refuses to acknowledge, so it is up to states, regions, companies, cities, and citizens to work as hard as possible to embrace clean electricity to prove its economic and environmental benefits and pave the way for a national clean energy strategy.