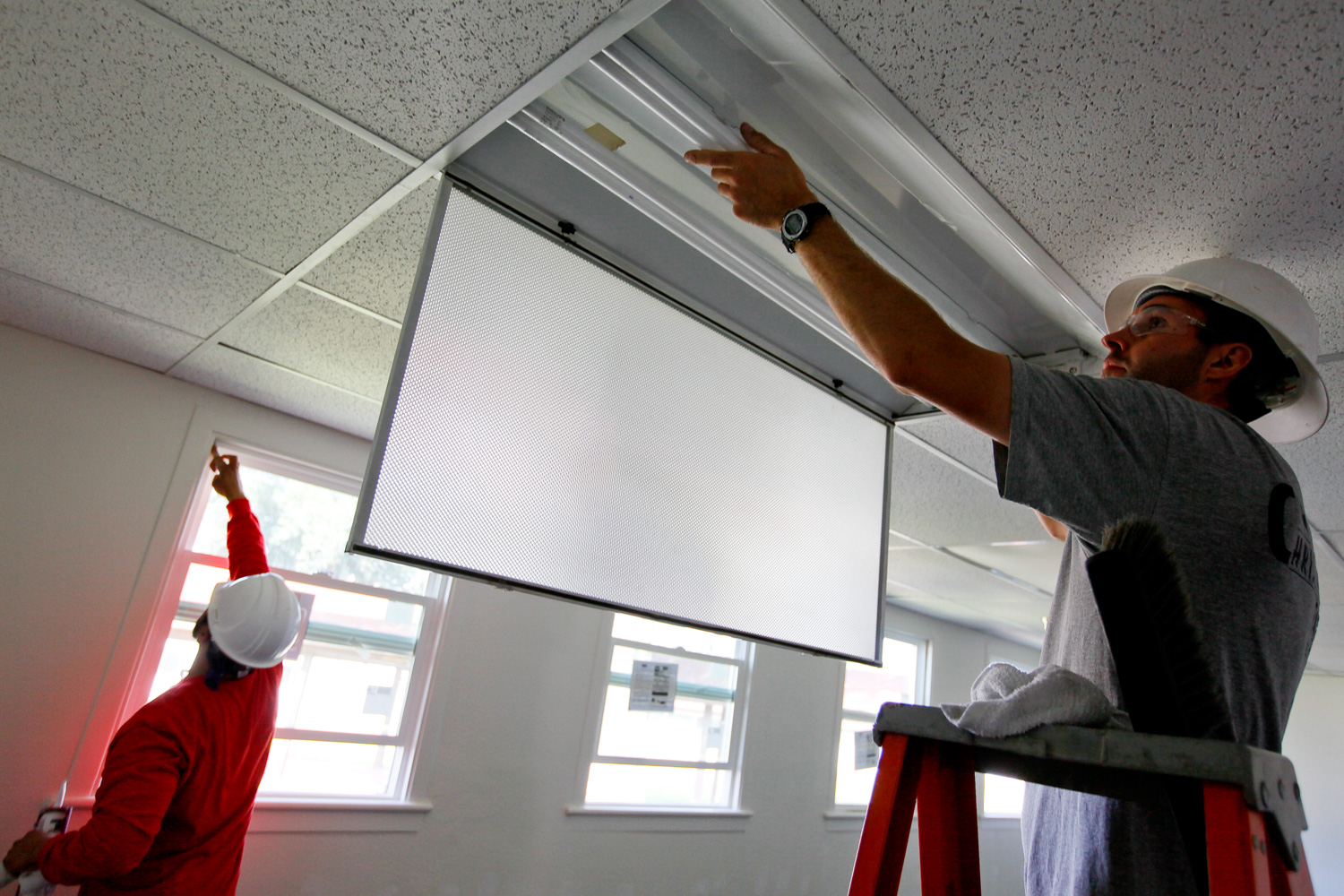 The results of Meeting the Challenge of Our Time: Pathways to a Clean Energy Future for the Northwest demonstrate the feasibility of Northwest states to achieve deep decarbonization by mid-century, even if we postulate several potential implementation challenges, such as lower levels of electrification and constraints on biomass availability.

Northwest CO2 emissions decrease in the Central Case from 165 million metric tons (MMT) in 2020 to 21 MMT in 2050. Emissions in the residential sector decline by 95%; in the commercial sector by 86%; in the productive (industrial) sector by 72%; and in the transportation sector by 91%.

Relatively inexpensive abatement measures for the built environment (residential and commercial sectors) and transportation enable a greater percentage of emission decreases for those sectors. The difficulty and expense of decarbonizing industrial end uses explains the increase in the productive sector.

The  figure below (and downloadable as a PDF) combines all of the results of the Central Case in one graphic to show the changes in energy demand and supply for the three energy sources—liquids, gas, and electricity—from 2020 to 2050 by sector. The right-hand side of the graphic shows the overall emissions decrease by energy source over the 30-year period of the study, demonstrating the significant drop in the carbon intensity of liquid fuels.

The graphic clearly shows the critical role of electrification for all three sources. Electrification decreases liquid fuel and gas demand for the transport, building, and productive (industrial) sectors. The increased demand for electricity across the sectors is also displayed.

In the low-carbon energy future, clean electricity must include electrifying as many transportation operations as possible to replace petroleum-generated liquid fuels, as well as substitute for the oil and natural gas that heats and cools buildings.

Electrifying the Northwest transportation sector is critical to achieving deep decarbonization and provides the least-cost path to reducing fossil fuels in transportation. Hence, the interactions between the fuel and electricity sectors  in long-term planning processes is paramount.

The difference between the 100% Clean Electricity Grid Case and the Central Case is much smaller than anticipated, where a nominal quantity of additional synthetic fuels and biofuels is needed to bridge the gap.

In addition, California’s 100% clean electricity requirement encourages the Northwest to export power to California that would otherwise be curtailed, thus giving that resource economic value, and makes it possible for there to be fewer requirements for California to build storage or additional resources to balance its California grid.

Significant cost savings ($11.1 billion in net present value from 2020 to 2050 accrued to the combined California and Northwest region) could be realized if interties between the Northwest and California were expanded (Northwest-California Transmission Case). But further investigation is required to understand the benefits fully.

Emerging technologies that can deploy hydrogen, carbon capture, and synthetic gas to create very low-carbon fuels will be important in the out-years. Clean electric fuels can be produced using renewable electricity. Splitting water molecules through electrolysis produces hydrogen that can constitute up to 7% of the gas in pipeline gas or be used as a feedstock in other processes. Combining that feedstock with carbon dioxide can create synthetic gas or liquid fuels that are as clean as the energy used to produce them.

Carbon dioxide as a feedstock can be captured via industrial waste streams, direct air capture, or from biorefineries that use carbon capture. Synthetic gas can be used for either heating or cooling instead of natural gas, or for powering transport as compressed liquefied gas, while synthetic liquid fuels can substitute for conventional transportation fuels.

The study highlights the important cross-sectoral role that new technologies and flexible electric loads could play in making economic use of renewable overgeneration and with balancing the grid in two key ways. First, the Northwest’s reliance on hydroelectric and wind resources means that periods of sustained overgeneration may become common.

This is a component of a least-cost decarbonized energy economy. However, when considering all possible system-balancing options, it is important to limit costs. Electric storage solutions, outside of limited pumped hydro, do not yet economically address long-duration balancing and system reliability when renewable energy production is low.

The mismatch between load and intermittent supply and the subsequent curtailment of generation is a lost opportunity to use that energy to decarbonize the economy. Hence a key challenge is how to minimize the costs of a deeply decarbonized, intermittent, renewable-dominant system, recognizing the many cross-sectoral opportunities that exist at high levels of decarbonization.

Electricity that would otherwise be curtailed is put to good use when the electricity system is integrated with fuels production for the rest of the energy economy, and electric loads can more flexibly respond to levels of renewable production. Gas and liquid transportation fuels can be stored far more cheaply than energy in electrochemical storage and large quantities of storage for these fuels exist today.

Second, Northwest grid planners need to address the challenge of interannual variability in hydroelectric and wind resources. Achieving high percentages of renewables is a fundamentally different challenge in years of low hydro and wind production than in high hydro and high wind years.

Models and approaches that don’t incorporate this sectoral integration and the potential for this portfolio of solutions tend to be suboptimal, as they result in higher cost for renewables systems and large amounts of unused energy.

These rare undergeneration events are most economically served by thermal generators that operate only for a very limited number of hours each year and can be fueled by biofuels, electric fuels, or fossil gas depending on policy design. In the study, gas and storage are added as new resources to provide resource adequacy and balancing, and the share of gas-fired generation is 3.7% in 2050.

In modeling regional 80% of 1990 levels by 2050 emissions targets, it is important to note the long-term role of carbon capture, either for high-capacity factor biofuels facilities or in the use of direct air capture facilities. This captured carbon may be used to provide a feedstock for power-to-fuels production or directly sequestered.

The study does not project a significant use of carbon capture and sequestration in the Northwest’s power sector (where the role of carbon capture has traditionally been most closely examined), due to the low-capacity factors at which thermal generators would operate in highly renewable systems.

Carbon capture and sequestration infrastructure is expensive, and low utilization makes it too costly to be part of a least-cost resource solution. As carbon reduction targets become even more stringent—with some even contemplating net-zero emissions futures—developing this technology will become more important.

The Northwest has an opportunity to create a complementary resource portfolio to meet California’s clean energy needs. Expanding interconnection capacity to California would allow greater integration of resources, relieving California’s overgeneration conditions and enabling the Northwest access to higher-quality California solar than what can be produced regionally.

Failure to electrify on the consumer side has enormous implications for energy supply, as depicted in the Limited Electrification and Efficiency Achieved Case. The scale of new wind, solar, direct air capture, electrolysis, and power-to-X facilities in this case (see a downloadable infographic of power-to-X) could be considered prohibitive in implementation and may ultimately require imports of electric fuels produced elsewhere.

Restricted availability of net-zero-carbon biomass as in the Limited Biomass Available for Liquid Fuels Case results in similar energy system impacts. If consumers don’t electrify or biofuels are not available, then the “backstop” resource to decarbonize is synthetic electric fuels, which may face implementation challenges to develop at the necessary scale and are expensive.

The Northwest avoids developing low-quality solar and increases wind development, while California develops additional high-quality solar and avoids procuring remote wind generation from other Western states. Savings are estimated as $11.1 billion net present value over the 30 years of the study (accrued to the combined California and Northwest region).

In the Limited Electrification and Efficiency Achieved Case, where deep electrification of building, transport, and industry does not occur, there are large volumes of residual liquid fuel demand for diesel fuel, jet fuel, and gasoline in the system.

This necessitates squeezing the use of gas-fired resources out of electricity generation to reduce emissions as much as possible in non-transportation sectors, and substantially ramps up direct air capture. While 2 million metric tons (MMT) are captured in 2050 in the Central Case, the Limited Electrification and Efficiency Achieved Case requires 27 MMT of carbon to be captured in 2050.

When biomass is constrained, high volumes of synthetic electric fuels must be produced to replace biofuels. This has considerable infrastructure implications, including two times the installed capacity of wind and solar resources, five times the electrolysis capacity, and six times the direct air capture capacity than what is needed in the Central Case.

The 100% Clean Energy case produces marginally different results from the Central Case. The share of gas-fired generation decreases from 3.7% to 1.7%, due to incremental renewables and energy storage deployment. Decarbonized pipeline gas supply (biofuels, hydrogen, and synthetic natural gas) covers all gas demand from power generation, and most of the incremental decarbonized pipeline gas is from synthetic gas.

Increasing gas in transport also has limited impact, but the study did not account for upstream methane leakage, so this result comes with a significant caveat. Freight trucks consuming higher pipeline gas means biofuels are not used to substitute for diesel fuel and are available for pipeline gas. This means minimal impacts across the energy system other than that reallocation from liquid biofuels to gaseous biofuels. But this case would be far less salutary if the full carbon accounting for methane leakage were considered.

The figure below combines all eight cases in one graphic to show the quantity and type of electricity generation (in GWh) required to achieve deep decarbonization in 2050.